The mountains loom ahead, considerations for the horizon line in wilderness exploration

While 6' mile hexes are prefered as they allow the horizon line to match human sight from the center to the edges, characters would be able to see mountains and hills further in the distance. While this is more things to remember during wilderness travel, it easily managed by the use of a ruler while running a game. The visibility of Hills, Mountains, and Mountains whose peaks are covered in snow could be easily determined by the use of a ruler or protractor. Further the sightline of a character who ascends a peak could be determined in the same way. A referee who wishes to implement this aspect of a milieu would also need to be aware of the effects of weather on visibility.

The following table describes the sight lines from which hexes can be seen (tops) and the range of hexes visible from characters being in different terrains. Thus a character who is amid the hills on the sunny day would be able to see 2 hexes out from their hex as opposed to someone who stands amid plains in a storm and would see 0 hexes out from their hex. Further the effects of precipitation limiting visibility are described.

Let's consider a character standing outside Akureyri village, on the map below. Using most horizon description descriptions he would be able to see that to the north is an expanse of woods, south and east are plains, and to the west is the sea. 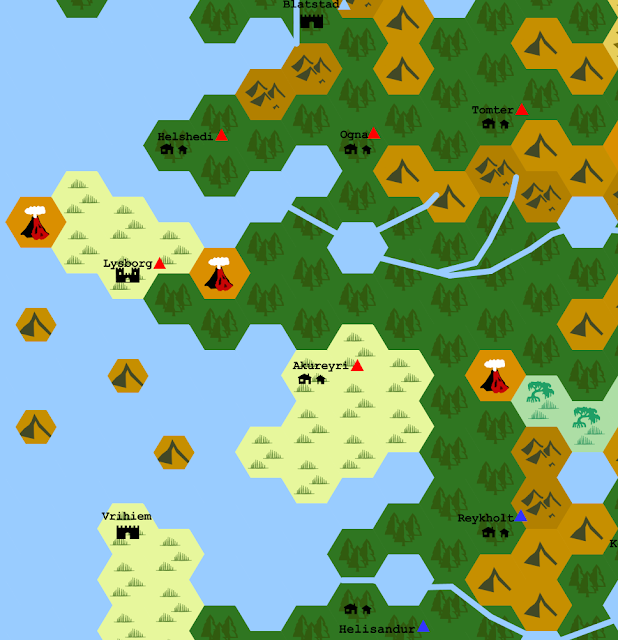 Now lets consider how far a character could see on a clear day using terrain elevation as a consideration for the horizon distance. As there are no hills or snow covered mountain hexes, this would be determined by the mountains hexes. Each of those hexes can be seen from 7 hexes away.

Thus a character standing outside Akureyri village would be able to see: to the north is an expanse of woods, south and east are plains, and to the west is the sea. Far north is a mountain range which expands west. To the northeast are taller mountains which extend west. To the east is a single mountain visible far away. Closer and south of that single mountain is a volcano from which black smoke rises. Looking south of the volcano another mountain range can be seen extending south. Looking west of Akureuri village a character would be able to see several peaks past the sea. Further looking northwest a character would be able to see two volcanoes, one of them distant.

Conversely a ship which is sailing from Virhiem to Lysborg during a storm would be unable to see the volcano northwest of it. They would then need to use the island peaks to orient themselves. 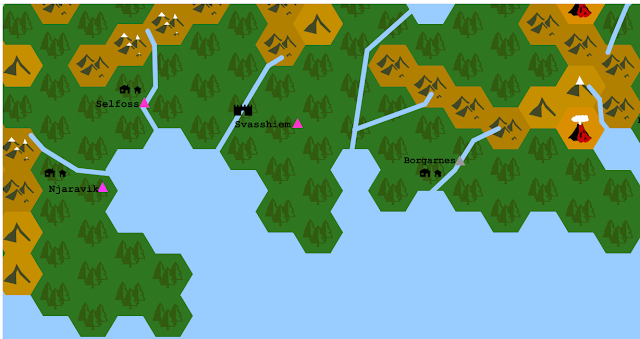 It also important to consider when elevation would block the sightline of other elevation. This is rather easily done if one simply visualizes the horizon and notes where the closest elevation is. Thus a character looking northwest of Svassheim would not be able to see the mountain hex directly north of Njaravik as there would be snow-covered mountains in the way.