Wheels within Wheels: A Proof of Jaquaying a Dungeon

So many people in the OSR are familiar with jaquaying the dungeon, but I don't think I have seen any explanations of why one should "jaquay" the dungeon. Below is a series of figure and commentary on the jaquaying of each of the figures. OSR excels at games of exploration with a great deal of emergent gameplay. Adding loops to a dungeon increases the number of paths and creates greater  possibilities of what a party may do within a dungeon. The increased number of loops provides greater means of emergent gameplay by altering the order and means of interacting with the elements stocked within a dungeon. The possibility of different paths allows for greater exploration of a dungeon and the ability for a party to choose between different approaches incentives exploration of the dungeon.

Figure 1
Here we have a linear dungeon that forks into two paths. We're going to use this to represent a dungeon which is not just a straight line. Here we have a single entry and then two different paths one could take. An issue with exploring this dungeon design is that to reach points A or B one must first cross points C,E or D,F. This makes these two points mandatory in order to reach A or B. This is not conducive to exploration as there is a single approach to each destination. However, we can increase the amount of exploration by creating a loop.

Figure 2
Here we have a looped dungeon. Now we have doubled the ways of reaching point A or B. Unlike figure 1, there is a incentive for a party to explore the dungeon. One is able to reach point A by passing point C or through B,D,E. Though a party is not aware of the loop, they would be able to turn back and attempt to pass through a different point. Consider a party trying to reach point E. They are first presented with options C and D and are able to choose which of the two to attempt to cross. Let's assume that the party is able to overcome C, they would then have the option to cross A or D and unlike Figure 1, neither of those would be mandatory to cross to reach E. In fact we can increase the amount of pathing options.

Figure 3
Here we have added a loop within the loop. Let's consider a party trying to reach point A. The party would be able to explore and find points D and E. They could choose to cross one, but then they would gain an even greater amount of options to cross. Let's assume a party crosses D, they would have options to try to pass through B,C,E in order to reach A. An increased number of loops incentives exploration of the dungeon further. Let's add another loop offset from the first and see how it changes exploration potential. 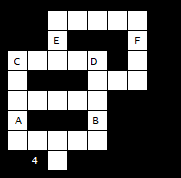 Figure 4
Here we have several loops. And much like adding a loop within a loop, adding an external loop greatly increases the amount of different pathing possible to be taken by a party. In sharp contrast to Figure 1, there are many different paths one could take. The increased number of paths creates greater and greater possibilities of what a party may do within a dungeon and provides greater means of emergent gameplay. There is no narrative for exploring a dungeon with many loops. A further tenant of jaquaying the dungeon is the addition of numerous entrances into the dungeon, lets see what that looks like. 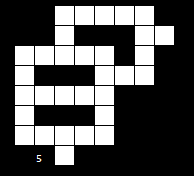 Figure 5
Here we have added another entrance into the dungeon, but the effects become apparent if we think of outside of the dungeon as a separate loop in itself, like depicted in figure 6. 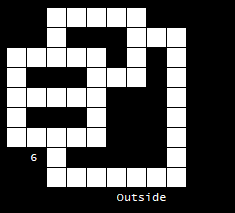 Figure 6
Here we see that the addition of multiple entrances into the dungeon, results in additional pathing possibilities. It is no different from adding loops in the dungeon layout. Further adding multiple stairs to lower levels as you can see in the further figure is little more than adding larger and larger loops. 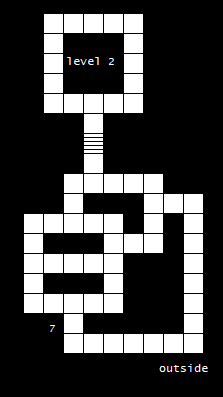 Figure 7
Here is an addition of the lower level which contains a loop within it. 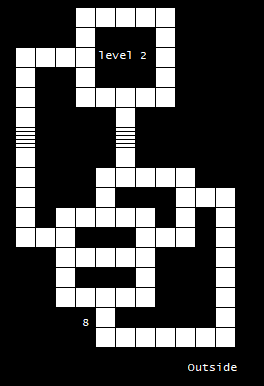 Figure 8
Here we have added another staircase to the 2nd level increasing the number of loops in the dungeon. 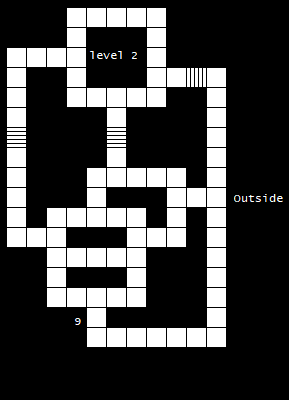 Figure 9
Finally we have added another entrance, this time to the second floor. This gives us many more loops. 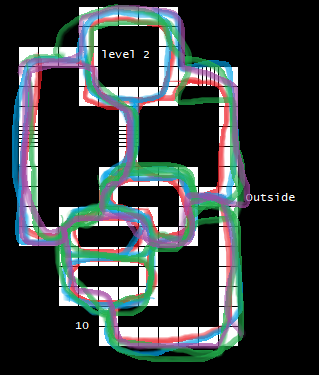 Hopefully you have found this post useful.
Posted by Lungfungus at 7:18 PM