Xenia: The Reaction Roll and Hospitality

This is primarily for Swords and Sorcery/Sandals games.

Xenia is the Greek term for hospitality and is the ancient code of conduct. It provides ample content to be used in an OSR game. This post draws from Greek hospitality rituals to explain a different procedure for the reaction roll.

So classically, Xenia referee to the relations of guests to hosts and hosts to guests. Hosts would provide food, drink, and gifts to guests. They would also offer safe escort to their next destination. Guests would be in turn courteous and not a threat nor a burden. Guests would relay information from whence they came. Hosts were able to call upon the Guests for assistance during their stay in their homes.

In many OSR games, many players are suspicious of those who would be kind and nice to them. Encountering people offering you food and gifts may set off alarms as to “can we trust these people?”.  But if the players know how to expect the rules of hospitality then they don’t have to always be on their guard and positive reactions roles can be greatly expanded to days not just mere moments.  A major component to the Greek Xenia is the idea of the gods walking about the world. The man seeking shelter form the rain could be Zeus, so you do not dare turn him away. I would say this easily fits into OSR games with spirits, demons, and Magic Users.

Use in a game

So without Charisma modification, reaction rolls have a 25% chance of hostility, 25% chance of friendliness, 50% of neutral. There is a further 3% chance of combat. This means that almost all encounters with speaking people results in conversation and player skill informs the outcome of these conversations. Further even if it is a hostile reaction roll it does not mean that it cannot be diffused with player skill. As a reminder hostility does not mean combat. A negative reaction roll could mean that the other party charges a toll, wishes to exploit, or even to take command of the players. This can be expanded on even if hospitality is kept.

So players entering a settlement/home would be offered food, water, and exchange gifts with the master of the domain and the reaction roll could dictate what happens after the customs. A negative reaction roll could be that the master decides to call upon the party to perform a perfidious task for him. Certain masters may seek the death of the party and send them into cursed locations to retrieve treasures, to slay terrible monsters, or to even save a princess. To many referees this will read like quest-hooks, and it honestly is a great way to do it. For example you stay at the hall of the chieftain of the tribe and after you exchange gifts and feast the chieftain calls upon you to enter the ruins of the ancient civilization to search for the healing herb. A roll of 1,1 on the reaction roll could even be the host flying into a murderous rage from having too much to drink, which fits well with the swords and sorcery aesthetic. It’s worth noting that back in the day there where wizards who would come out of their towers and geas players to go into dungeons. So this isn’t all that wild of a notion. Xenia also fits in well into domain play where it would be not only people asking things of the players as rulers but the players could in turn ask things of their guests.
Posted by Lungfungus at 5:47 PM 2 comments: 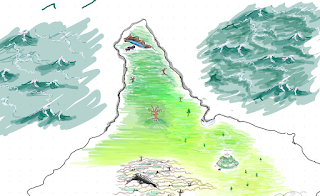 This pdf details the island for the past 9 sessions of the games. I will upload further island hexes as they get play-tested by myself and a few other referees. Some references of magic and magic items within correspond to a game-document that is still being play-tested but it should not be difficult to replace them with other OSR rule-sets.


If you use these in your games, please let me know how it goes!

Another two documents that maybe useful are the 2 primers I gave my players at the start of the game.

Posted by Lungfungus at 8:55 AM No comments: