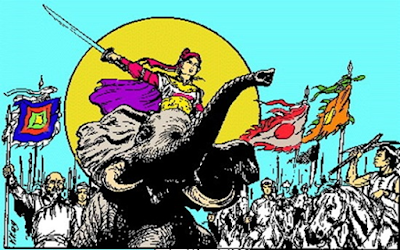 Historically, women are not front-line combatants. Mythologies and folk histories are full of tales of memorable men with women fulfilling a supporting or object role. There are numerous tales of women who take up the male role in societies or garb themselves in arms and armor and ascend from their prescribed societal role in order to become heroes. In this event they are contrasted from the rest of their female counterparts as taking on the male role and in many cases disguise themselves in order to do so.

The players rules document explain that every character rolled is male. This creates uniformity of sex among the characters and facilitates the integration into domain play by marriage. If every character is male then the procedure for marriage can be modeled on a man asking for a woman's hand or a woman's hand being offered by her father. Obviously if your setting does not assume a patriarchal historical marriage norm, you may need to discard or adapt these rules

The Amazon class is then the female character or a female-as-race class, in the same way that an elf class is a race as class. In order to qualify to play an Amazon a character rolled requires a minimum of 12 on their charisma and has a maximum of 12 in Thews (strength). In my games the attribute roll is a 2d6+3 which results in 22.4% of characters qualifying to play as an Amazon. The Amazon is not listed in the player rules document, and a player is only informed of their ability to play one by the roll of the dice. This makes the choice to play one have to be a deliberate action from the player.

While wearing a helm an Amazon is mechanically equivalent to a fighting man of an equal level, but the removal of her helm results in a new reaction roll. The requirement of a minimum 12 of charisma results in the lowest possible reaction roll being a 3, which means that with the removal of a helm an Amazon cannot cause immediate attack (roll of snake eyes) and instead has roughly a 73% chance of turning a encounter with a hostile reaction roll into a neutral one. This is to model the cultural effect of revealing a woman who has taken on male societal roles. This results in the XP requirement of an amazon to be 120% of a fighting man's or 200% of a thief's.

The only other difference from a fighter is that an Amazon does not roll on the dismemberment table. Instead all results are treated as if rolling a 5 aka internal wounds resulting in a subtraction of 1d6+1 from a character's maximum HP. I do this to avoid having to go into graphic depictions of violence against women at the table as they are slain by monsters in the underworld.

Posted by Lungfungus at 4:38 PM