On the Relationship of Surprise and Stealth

I've seen some different interpretations of how to make rulings about stealth in OSR games, but I have rarely seen surprise involved in those discussions. The two are very connected and a proper understanding of what surprise and stealth mean in an OSR game would allow referees to make rulings on the matter easily. [This post came from some discussion with Wizzzargh]

Implicit in the surprise roll, is that characters who are surprised by a wandering monster are not aware of the monsters until they appear and possibly attack. 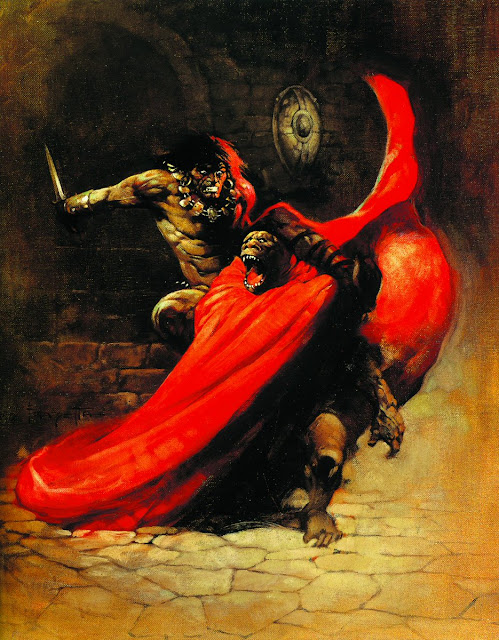 When possible, surprise is rolled for each side of an encounter. - Basic

This means that certain conditions remove the chance of surprise. Consider a chamber which contains ghouls feasting on a corpse past a door. A character who listens at a door and hears the sound of chewing and breaking bone would eliminate the party’s chance of being surprised by the ghouls as they would be aware of the entity past the door. Another thing to consider is what happens when the party is surprised by an enemy which rolls snake-eyes for their reaction roll, should that enemy be allies to slay their targets? Because if a character was able to successfully sneak up on an enemy with a dagger, I would absolutely rule that they could slit their throat.

Certain OSR rules grant increased damage for ambushes, such as LotFP’s sneak skill, or they divide character HP into Flesh and Grit and allow ambushes to deal damage directly to Flesh. But the reaction roll only has a 2.77% chance of encountered creatures attacking instantly. Coupled with the base 2 in 6 chance of being surprised this works out to be a 0.93% of characters being ambushed by a wandering monster encounter where they would be slain by being ambushed. The issue that arises in play is that even if monsters do not slay characters on an ambush and instead deal regular damage, it is often enough to severely disadvantage the players to where they will die. It feels like bad sportsmanship to include a random chance of death every turn.

I think a much more useful combination of surprise and the negative reaction roll is to create disadvantaged situations for the characters, surprised being more of ambushed. Consider an encounter with a lion where it has surprise and rolled a negative reaction. I think the lion pouncing from the tall grass atop of a player and clamping it’s jaws upon his throat to be a better use of the surprise round. That character is as good as dead without the quick thinking and wits of the other party members. This works well in conjunction with a negative reaction roll as hostility similar to how it would result in a group of sentient beings demanding a toll for passing rather than just being hostile before attacking on rolls of 3-5 of the reaction roll.

Further this view of the encountered creature generating a disadvantage that the players must overcome, is a usable heuristic with different creatures using unique tactics. This would allow players to prepare against them and outwit their opponents just as they outwit traps. If the mermen of the Blue River always throw weighted nets over their foes in an ambush, the players would be wise to carry blades on their persons with which to quickly free themselves or to favor light armor so that they do not drown.

The knowledge of an entity existing is an important consideration when making a ruling on stealthy movement. A character would not have a need to have dice decide the nature of their sneaking if no one is aware of them. Surprise must then be considered when a character (usually a thief) attempts to “stealth” for infiltration or ambush purposes. If the entity attempting stealth is aware of the other entities he would not roll to be surprised, but they still would be. In this way the 2 in 6 chance of being surprised would supersede the move silently/stealth roll. If the other entities were not surprised then the character’s stealth chance would be applied, essentially as a saving throw. This can further be a expanded to attempting to sneak past those aware or those unaware. Consider an assassin sneaking past guards to slay the king. If the guards were not aware of him entering the palace he would gain both the surprise chance and then sneaking save in his favor. Had the assassin killed the guard outside the King’s bed chamber, the guard may have dropped his mace which would have made the king become suspicious of an attacker. The assassin would not get the benefit of surprise over the king.

Posted by Lungfungus at 4:39 PM