Burial Temple of the Tridobatrakus: An OSR dungeon

If you are in my October Game, please read no further! 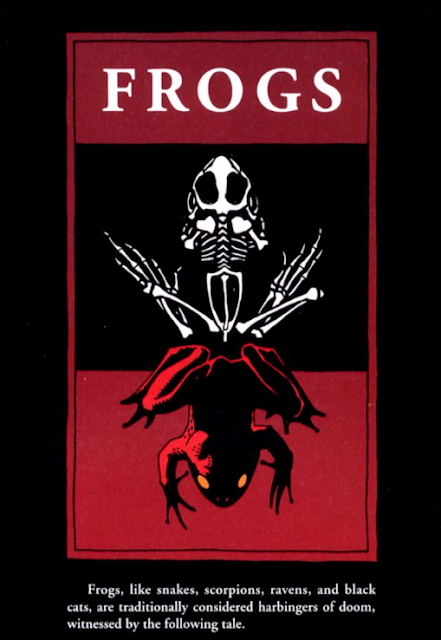 The Burial Temple of the Tridobatrakus was one a sacred site. Now it is little more than a ruined complex beneath the earth. One a desolate island, surrounded by broken and stony ruins stand a pair of stone double doors that lead inwards to room 1. 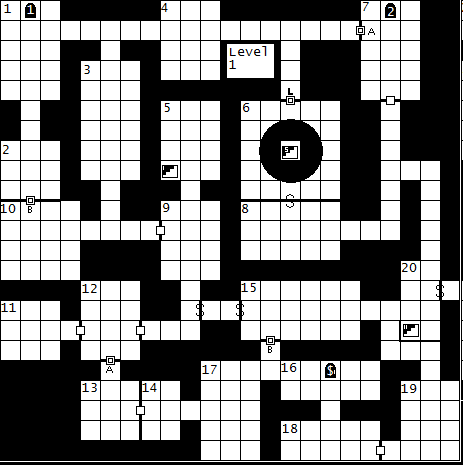 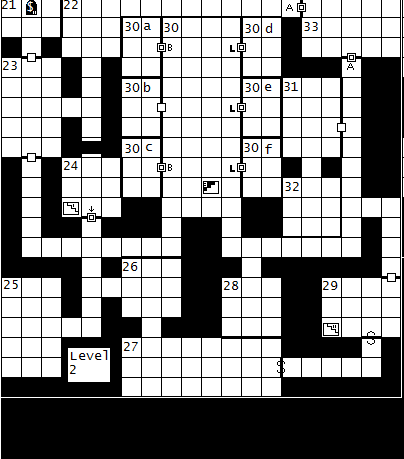 Room21 Two rows of columns extend throughout the room. Between them is a stone statue of a woman wearing a diadem stands before a bowl of pitch. If the pitch is lit, the stone of the statue crumbles away revealing the treasure. 250s (Diadem of a single amethyst 115s surrounded by two peridots on either sides 30s x4). Along the northern wall a false wall leads to a tunnel which exits amid the ruins.
Room22 Massive Web covers the entire room
Room23 A corpse in rotting leathers lies dead in the center of the room, torch in hand. Four statues of coiled serpents line the eastern wall and Five statues of coiled serpents line the western wall, in facing pairs. The statues of the western wall shoot darts if a torch is brought in front of them. A corpse of a man in a leather jerkin lies in the center of the room, KeyA found amid his items.
Room24 A single statue of a bound man has a pair of arrows embedded in it and bleeds from it's wounds. The southern door slams behind those who exit this room dealing 1d6 damage to those who attempt to block it., The northern passage has collapsed and is filled with stones. A stair well extends upwards to room 5
Room25 Web covers the ceiling and caught in the web are a fair of Men-frog corpses. A stone sarcophagus in the center of the room inside is a skeleton holdings an axe crafted from silver 330s.
Room26 Large sarcophagus, inside is a skeleton covered by mold. Along the northern wall is statue of an archer getting read to pull back a bow, but there is no arrow. On the eastern wall is a statue of man bound by rope. If an arrow is placed in the archer's hand, the statue will draw and fire it into the head of the bound man turning him back into flesh. His blood will pool itself and within it the arrows will be visible. 26 +2 arrows
Room27 Broken basalt pillar in the center of the room. A sarcophagus on the norther wall contains a skeleton with a silver ring set with peridot 80s, the corpse rises if one attempts to touch the ring.
Room28 Translucent mold covers the floor and roughly the bottom third of the walls. A massive bloated corpse of a frog-man, clearly distended by something within, holds a skeleton of a man who possesses the following treasure. (150s coins, necklace of 10 small pearls 15x 10s. 5 Frogmen surround the corpse and sing a droning dirge in their croaking voices.
Room29 This room is covered in 5' of water, the ceiling is 15' high. As stairwell extends upward to room 20.
Room30 Pair of Frog-headed statues on the north and southern wall, the southern wall broken and partially collapsed. The center of the room is a 2' pool of water beneath which a mosaic of a spiral pattern can be seen. A stairwell descends down to room 37.
Room30a One a stone pedestal stands a small stone steele which depicts a tentacled monstrosity, which has a single jade eye 165s
Room30b Corpse of Tentacled Monstrosity
Room30c One a stone pedestal stands a small stone steele which depicts a tentacled monstrosity
Room30d Corpse of a priest holds a pewter chalice 50s in his left hand, has his right hand replaced with a crude silver prosthetic 450s, necklace of nine jasper orbs 115s. The corpse unleashes foul gas for 1d6 damage if one touches it.
Room30e Tentacled Monstrosity
Room30f Blessings of the Frog God: Those who touch the glowing orb of the statue will be changed, every time take damage roll a 1d100 if below damage dealt, they degenerate, further every week there is a cumulative 3 in 100 change of degenerating. [something like this]
Room31 Beneath thick webbing, a mosaic on the ceiling depicts a man in a conical hat with only a single arm and three rows of men kneeling before him. In front of the mosaic is a stone sarcophagus which holds a skeleton which wears a +2 Cuirass. 2 Giant Spiders make their lair in this room.
Room32 A mosaic on the southern wall depicts a black serpent beneath it is the inscription "Whom poisons the sun" and before the mosaic is a pyramid of skulls and an altar which holds a Stone idol of a snarling monstrous figure which holds a jade ingot in its claws 120s. If the idol is touched, a walking corpse will emerge from the pyramid of skulls.
Room33 Single basalt pillar that is cold to the touch stands along the north wall. Along the eastern wall is a sarcophagus which contains a skeleton which holds KeyB and bears a magic ring on it's finger. The corpse rises if one attempts to touch the ring. 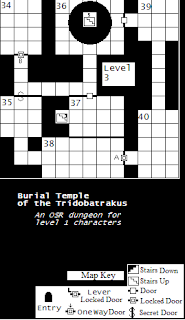 Room34 A dozen mummified men each hold rusted weapons line the walls of this room surrounding a single pillar. The pillar can be slid to reveal a coffin beneath which contains 525s coins, dagger 15s in a sheath inlaid with lapis lazuli 60s. 4 Frogmen lounge amid the mummified men, chanting a droning song in their croaking voices.
Room35 Pair of stone frog-headed statues, each of them holding stone spears. 33 Man-Frogs make their lair here.
Room36 Hundreds of broken skeletons line the bottom of this massive pit, none of them have skulls. A series of rods in the walls spirals upwards and could be climbed up to room 6.
Room37 Six mummified horses, three on the northern wall, three on the southern wall, are all now covered in mold. A stairwell extends up to room 30.
Room38 Massive Stone throne fills up the room. The Infected Corpse of the Old King glitters with the jewelry he was interred with.Sapphire 500s ring 35s, Heavy silver amulet 260s, silver diadem 190s. A single sword(bane) hangs from a scabbard at his side and 1115s coins have been scattered around the room like seeds by the wind.
Room39 Five stalagtites hang down from the ceiling each slowly dripping water
Room40 Along the eastern wall a steele depicts the ancient king slaying men. 11 Frogmen prostrate themselves before the steele chanting a droning song in their croaking voices. If the frogmen are slain, one of their stomachs will be cut open and KeyAB will be revealed.


Possessive Corpse
3HD, Defense as unarmored man, may force a being within 15' to save vs being possessed by the corpse's spirit for 1d6+1 rounds ends if corpse brought to 0 HP, slow, always hostile, morale 12
A single skeleton walks here, a gaping hole in it's skull, white gas billowing out of the orifices and holes.

Dog-Sized Spiders
I HD, defense as unarmored, bite 1d8, may climb on ceilings and walls, faster than men, morale 7
Spiders the size of dogs climb along the ceiling trailing thin webs behind them

Frog-Men
2HD, Defense as unarmored, 2x claws 1d8 each, morale 8
Giant-Frogs with the beards, brows, and hands of men

Tentacled Monstrosity
4HD, armor as unarmored man, 4x tentacles 1d8 each, if any attack rolls a 20 the target is dragged into the mass of tentacles as being swallowed whole, if an attack rolls 4 higher than a target's armor then they must roll beneath strength or become grappled, nearly immobile, morale 10
Tentacles monstrosity kept locked away beneath the tombs. It lashes out with it's numerous tentacles.

Giant Spider
4HD, armor as leather, bite 1d8 plus poison that forces a save vs death, slow, morale 9
A massive spider with terrible fangs hides away in the shadows.

The Infected Corpse of the Old King
6HD, Armor as leather + shield, arm 3d8, slow, always hostile, morale 12
The corpse of the old king has become infected by some terrible entity which spills out from from his corpse. One of his arms has swollen so much that he merely trails behind it like a vestigial organ. The giant arm ends in fingers grown to the size of snakes which trash about trying to crush something.
Posted by Lungfungus at 11:15 AM

Email ThisBlogThis!Share to TwitterShare to FacebookShare to Pinterest
Labels: Dungeon