-
1. Players are given current weather, date, and information about current hex 1 and daylight left 2
2. Players declare travel intent (We head northwards through the forests)
3. Hex Weight 3 is calculated from conditions, terrain of current hex, and party actions
4. Hex Weight is subtracted from party's Travel Pool 4
5. Player with highest Journey skill is checked against (in secret) if failed see 5a
5a. Roll for Wilderness Complication 5
6. Wilderness Anecdote 6 is rolled for if an encounter see 6a
6a. Wilderness Encounter 7 is rolled for
7. Players are moved into destination hex and are given information about the current hex and daylight left
8. Players make take other actions within a hex 8

Rather than having a unique mechanic for weather, I simply substitute weather as an encounterable monster, which generally fits in with the folklore of many cultures viewing the weather as an entity itself. The reaction table below determines if the weather is gonna be pleasant or hostile. 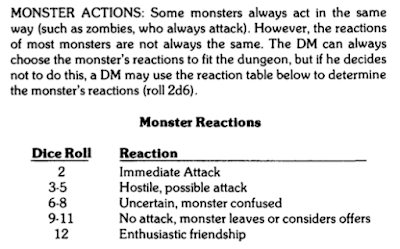 So the distribution is 2-5 as poor, 6-8 as neutral, and 9-12 as fair. It's pretty simple to assign different effects on the weather. I've also added the categories of bad and terrible for the effects of rolling multiple poor reactions in a row, rolling poor weather while in poor weather resulting in bad weather and rolling poor weather while in bad weather resulting in terrible weather. For bad and terrible weather treat further reaction rolls of neutral and fair reactions as a reset into neutral weather. Every time you roll for the weather also roll a 1d6, the value of that die determines how long the current weather situation lasts.


So the effects of weather changes based on the season and we have a way to track the days so why not simply combine the two into a calendar. Each season is composed of three months and each month is composed of 30 days. This gives us a year with 360 days, and is honestly good enough for me to use in game as a referee. Many cultures used lunar calendars and it is a useful heuristic for making a gameable calendar. So in real life the moon changes from New Moon to Full Moon over 14 days. I'll use 13 days between the New Moon to Full Moon, 1 day of New Moon, and 3 days of Full Moon. You can start every month on the New Moon which causes days 15-17 to be the Full Moon. This gives us a 30 day cycle and three usable states of the moon the effects of which are detailed on the table below.


The following information is given to players while in a hex:
1. The terrain of the current hex
2. What terrain they can see in the cardinal directions
3. What hex contents they can see

Example:
You are all in the New Rind Timberlands: The trees here menace from numerous wild angles, each one primordial by its girth, and their limbs a tumult of bifurcated extensions. To the north are mountains, to the east and south is a large lake, and to the west are more of the New Rind Timberlands. You can see the town of New Rind from here as well as the Harpy's Road heading northwards.


Pressing on in darkness:

If a hex is traveled in under darkness it requires a Journey (wilderness travel skill) roll on a 1d12 instead of 1d6. Further encounters are rolled for twice and each character who doesn't burn a torch counts as surprised in an encounter.

This information would be given qualitatively instead to of quantitatively to the players.

Example:
The sun is setting in the sky, night will fall soon. If you don't make camp soon you will end up traveling under darkness.

Hexes of different terrains have a different weight to cross them.

Certain conditions may also alter the weight of a hex

As previously mentioned an average man can cross 3 hexes of plains a day. This number can be referred to as his Travel Pool and be subtracted from as he crosses hexes which are not plains.

Example:
It is summer so the man has a Travel Pool of 4. He chooses to travel along a road through hills while also hunting. 1.5 - 0.5 + 2.0 = 3.0. Upon doing so he would have a Travel Pool of 1 left, and if he choose to simply travel without hunting he would be able to cross another hills hex before night falls.

The other part of wilderness travel is how well a character can navigate the wilds. As far as I know only LotFP has a dedicated skill (Bushcraft) for determining how well characters travel through the wilderness (if this an incorrect way of using this skill let me know). In my games characters have a 1 in 6 skill which they can improve for traveling through the wilderness. If characters are successful in their travel attempt, nothing happens. Otherwise consult the table below.

For each hex traveled through a wilderness anecdote occurs.

Further while traveling through the wilderness, characters may take actions on their journey (such as searching a hex or hunting) each such attempt or traveling through a hex with a lair within it incurs an additional roll of the Wilderness Anecdote Table.

So in a dungeon, a wandering monster check is resolved rather elegantly in regards to location. However, in most wilderness expeditions there is a great deal of locational abstraction in regards to how far the players travel. In order to not adjudicate every monster from attacking them in their sleep, the following procedures generate a more varied and randomized placement of wilderness monster encounters. There are present rules for Surprise and Reaction rolls so there is not a further need to describe them here.


This roll should be done in conjunction with the surprise, reaction, and distance roll. Each terrain gives a different effect and this should make the wilderness more memorable if not more horrible.

Distance of Harsh or Compromising Terrain:

Weather effects on Encountering Monsters in the Wilderness

*This damage cannot reduce a character below 1 HP


Actions within the wilderness

A character may roll under half of their wisdom in order to search the hex for anything.

A character may roll under their wisdom in order to search the hex to find the location of something they are aware like a dungeon or another hidden hex feature.

Each of these actions incurs another wilderness anecdote roll and takes up as much time as traveling through a hex with a  Hex Weight of 2.0.


In real life, animals are hunted for their materials. Certain creatures are eaten while others are turned into usable materials. Below are simple abstractions for the usage of monsters once they are hunted.

If a monster is brought down to 0 hp, then there is a 1 in 6 it took excess trauma and it's corpse is unusuable. Any attacks which deal over 10 points of damage or poisons, fires, magics, and similar awful effects increase the chance of a corpses being unusable by 1 in 6.

If one has access to salt, fire, and tools one can turn a monster corpse into regular rations. This process takes a number of hours equal to the HD of the monster and grants a number of rations equal to its HD squared. Thus the Giant Elk could be turned into 16 rations. Monsters that have poison have a 1 in 6 chance of each ration being safe to eat.

A quick measure of how much one can fetch for the valueable parts of a monster can be determined by the table below. Any monster can be rolled on the Corpse Value Table to determine how much it's parts can be sold for.


Each time a is monster encountered the corpse value should be rolled for only once on the table, unless one such monster is encountered with more HP than 5 * the number of HD it possesses. This would represent an especially magnificent specimen of higher value, resulting in an increase of the multiplied silver value by 3. In the case of the Giant Elk previously described above for eating rations, assuming it was rolled to have a corpse value of (4)^2 * 6 = 96 silver, one having more than 20 HP would have a magnificent crown of horns which would be worth 144 silver.

Monsters which deal poison can have their venom sacs or other special organs harvested in order to make doses of that poison. Such an organ harvested contains a number of doses of poison equal to the HD of the monster. The value of selling such poison can be reflected as costing half of the corpse value.
Posted by Lungfungus at 1:52 PM